Sabukaze Koyo Sekigun is an archaeological site where many historic relics were found.

Sabukaze Koyo Sekigun is an archaeological site where many historic relics were found.

In Setouchi city and Bizen city, there are around 130 Sue pottery kilns that were used for 450 years from the second half of the Kofun period to the end of the Heian period (around 1000 to 1450 years ago). They are called the Remains of the Old Kilns of Oku. Sabukaze Koyo Sekigun is situated at the southernmost point.

The pottery ware here are named Sueki, or Sue pottery.

Sueki is pottery with a blue-grey colour that is baked in kilns. There are many different kinds of objects that are made, but the most common ones are cups in which you arrange food or offerings for the Gods, pots in which you would store liquids, such as water or sake, or food (rice, fruits, etc). Other objects such as takatsuki (tall glasses), haso, hiraka (pitcher), plates, disks, long neck jars, short neck jars, or pots were also made. The rarest objects were coffins made of clay called tokan, shibis (roof tiles used as roof decorations in temples), or suzuri (ink stone mortars for the grinding and containment of ink) used in places where letters are written such as government offices. The tokan in Sabukaze Koyo Sekigun has a lid that resembles the roof of a house. Many of them have strong regional characteristics used in ancient tombs in the southern part of Okayama Prefecture. Many shibis, or roof decorations, with fin patterns resembling those of temples in the city of Okayama and Osaka prefecture were found. There are also Sue pottery with letters carved on the front side, such as 大口or 上, but the meaning is unknown.
Sue pottery was brought to Japan in the Kofun period (around 1600 years ago) from the Korean peninsula by migrant engineers. They introduced new techniques that were not used in the pottery made until then, such as the Yayoi pottery or Haji pottery which were continuously made from the Jomon period (14,000-300 BC).
The first new technique was the use of a potter’s wheel. By using a wheel, they were able to more efficiently make bigger and better regulated objects.
The second one was the use of a kiln. By using a kiln, they were able to bake the ceramics at temperatures higher than 1000 degrees, there was less leakage, and they were therefore able to make stronger and harder objects.
In order to obtain the blue-grey colour of the Sue pottery, the kiln is closed up right at the final stage of the baking, therefore creating oxygen insufficiency. This oxygen reduction will lead to a deoxidisation of the iron oxyde in the the clay. This Sue pottery made in an ‘oxygen reduction atmosphere’, in which chemical reaction were skilfully handled, is also known as the ‘ancient high-tech goods’. In addition, in order to see the green glazing of the Sue pottery, they cover it with the ash of burnt firewood, and melt it.

The kilns found in Koyo Sekigun are called Anagama. They were tunnels dug in the side of a hill, with clay plastered inside the hole.
The entrance of the kiln through which you would put in the firewood was called a takiguchi. There would be a place for the burning of the wood called the ‘combustion area’, as well as an area where you would place the Sue pottery named the ‘firing area’. There was also a chimney to let the smoke out. In addition, there was also a haibara, or ash field, that would spread on the slope under the takiguchi where scraped out ash from the kiln and broken or deformed Sue pottery would be thrown away.
The ceiling and the floor of the kilns in Sabukaze Koyo Sekigun have been plastered in clay. Traces of reparations and mending have also been found. In addition of knowing that the kilns were located deep underground, it is also known that there were underground ceremony rites to celebrate the fact that the kilns could not be seen from the surface.

Two conditions are needed in order to build a kiln: soil (clay) to make the pottery and firewood to burn inside of the kiln. Even today, clay is being gathered where Sabukaze Koyo Sekigun is located, and the forests surrounding it is rich in firewood. However, if you continue on using soil and wood over a long period of time, they eventually disappear. It is for that reason that the kilns of Oku Koyo Sekigun have moved around and have been built in the large area of Setouchi City and Bizen City. Therefore, how come there has been kilns in Sabukaze Koyo Sekigun for around as long as a hundred years?
It is because carrying out Sue pottery from Sabukaze Koyo Sekigun was very convenient. Indeed, the Kinkai Bay, where the sea used to be at the time, was not even 1km south from Sabukaze Koyo Sekigun, therefore Sue pottery could easily be shipped to Nara capital through the Seto Inland Sea. 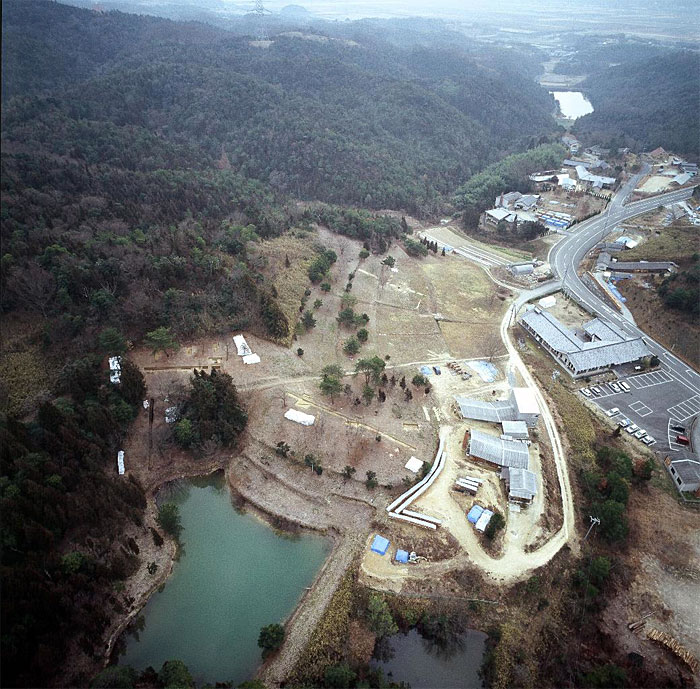 5.The Relocation of Kilns

6.The Identifiation of Archaeological Finds

Thanks to science and to some distinctive features, it is possible to a certain extent to determine producing areas.
When Sabukaze Koyo Seki was still active, a few of the biggest production areas that delivered Sue pottery to cities were Suemura (Osaka prefecture), Owari (Aichi Prefecture), and Mino (Gifu Prefecture). When you closely observe Sue pottery, you realise that pottery from Sabukaze Koyo Seki was slightly whiter than the pottery made in Suemura. When compared to those of Mino, you notice a few differences such as the quantity of black grains inside of it. In addition, when you scientifically study the composition of the soil used to make Sue pottery, many differences appear, and you are then able to distinguish where the Sue pottery was made.
However, it is difficult to verify if they were baked in Sabukaze Koyo Sekigun. Despite the power of science, it is not possible to distinguish the kilns of Oku Koyo Sekigun. Therefore, it is not known whether it has the same features or motifs as the Sue pottery found in Sabukaze Koyo Sekigun.
The Sue pottery made in the Sabukaze Koyo Sekigun were conscientiously-made beautiful objects, with a whitish colour and a natural green glaze running on top of it. It is without any doubt that it was very popular even in the capital. 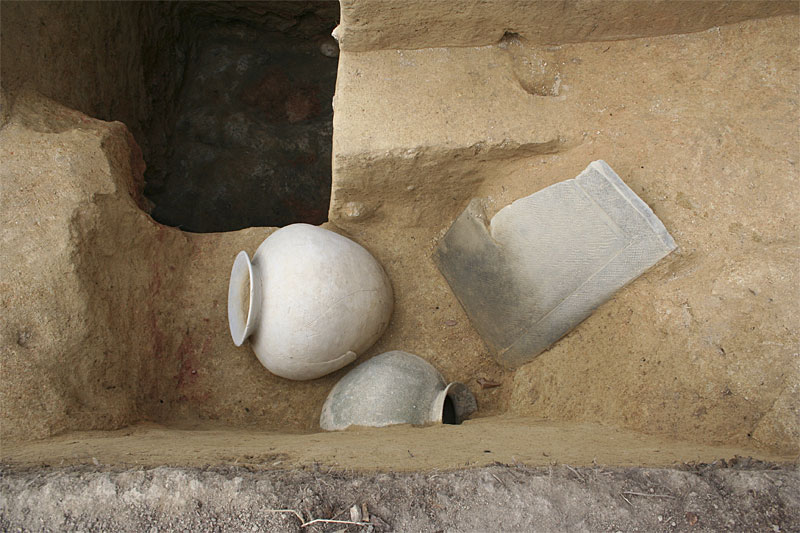 Sabukaze Koyo Sekigun was discovered by Mokusui Tokizane.
Mokusui was born in the village of Nagahama (currently known as part of Ushimado area in Setouchi City) on the 29th of April 1896. In 1927, he started gathering Sue pottery in Sabukaze, which increased his interest in pottery, and led him to study and deepen his knowledge on the subject, and to go visit other ruins of kilns in Oku to gather more pottery. As a result, he published articles in archaeology reviews such as ‘Kibi Archaeology’, and published his own illustrated data book called ‘The Ruins of Pottery Kilns of Oku’ (5 volumes in total).
In the documents that he gathered called ‘Tokizane Collection’, he has diligently written in sumi ink the lot number, depth, date of discovery and so forth of each object he has unearthed, thus enhancing the academic nature of his documents.
Mokusui died at the age of 96 years old on the 13th of June 1993. A statue of him made in Bizen pottery was erected in the garden of the Sabukaze Art Gallery to honour his achievements and in gratitude for his life-long efforts.
Today, Sabukaze Koyo Sekigun has been recognised as National Historic Site, and has been preserved thanks to Mokusui’s efforts. 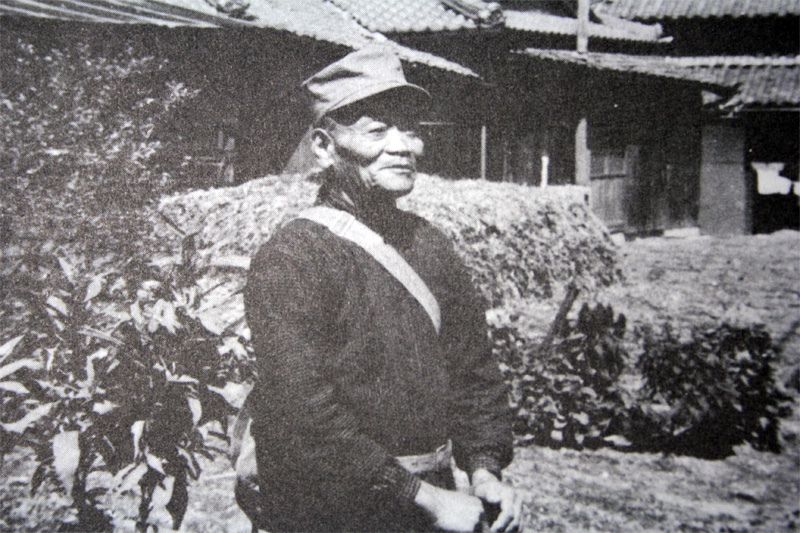 8.Relation between Sabukaze kilns and the capitals

Please check the PDF file below for details. 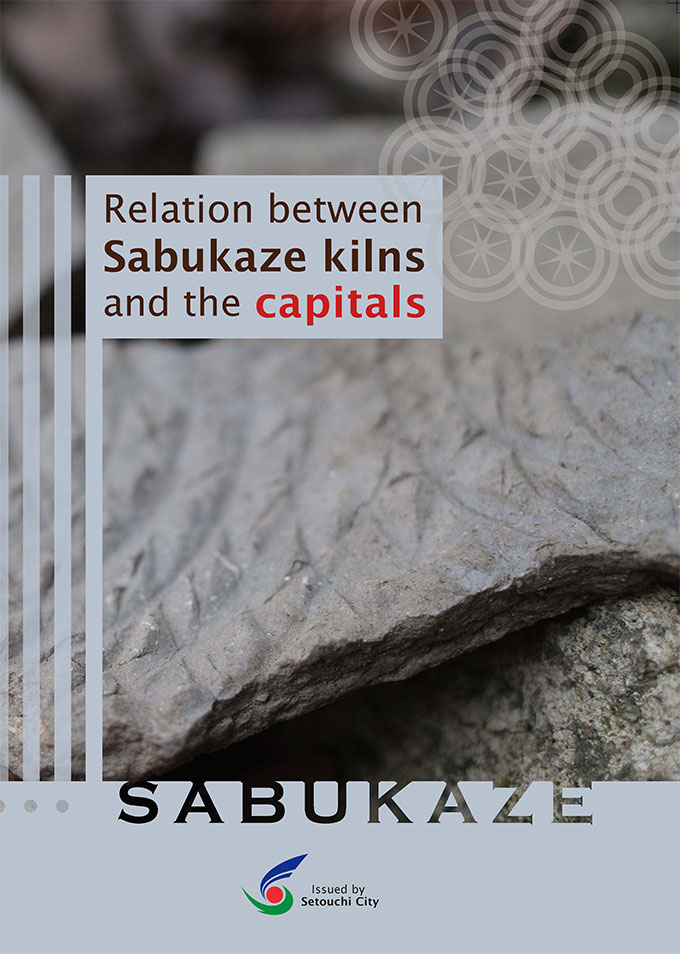